This page is under construction

Note: Any added or clarifying statements that were not part of the original are denoted in brackets [...]. An additional reference for the breed standard is the Schweizerischer Schafzuchtverband (Swiss Sheep Breeding Association), a.k.a. SSZV, the herdbook (studbook) "umbrella" association for the various Swiss sheep breeds (including Valais Blacknose).

We are grateful to Mr. Richard Zeiter (Judge) and Mr. Daniel Steiner (President) from SN Verband for assistance in clarifying the translation of some items in the breed standard. 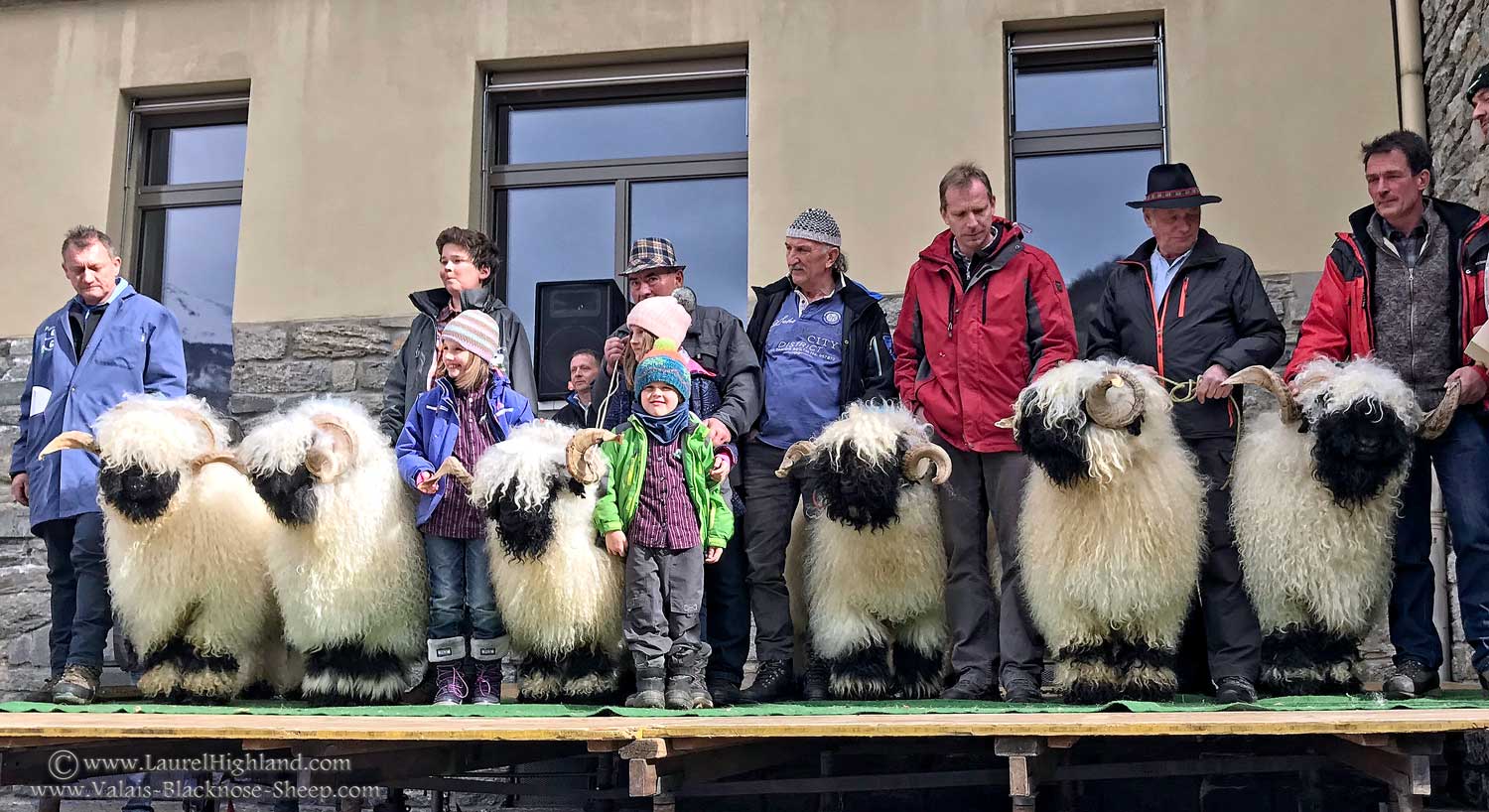 Some of the top Valais Blacknose rams at Widdermarkt 2018 in Visp, Switzerland


The Blacknose Sheep is a frugal landrace that is well adapted to the harsh conditions of the mountains. This unique breed is located in the Upper Valais, which is the German-speaking part of the canton of Valais. There is evidence that this breed has existed since the 15th century. Today there are 13,700 herd book animals. The reproduction rate is 1.6 lambs per year. 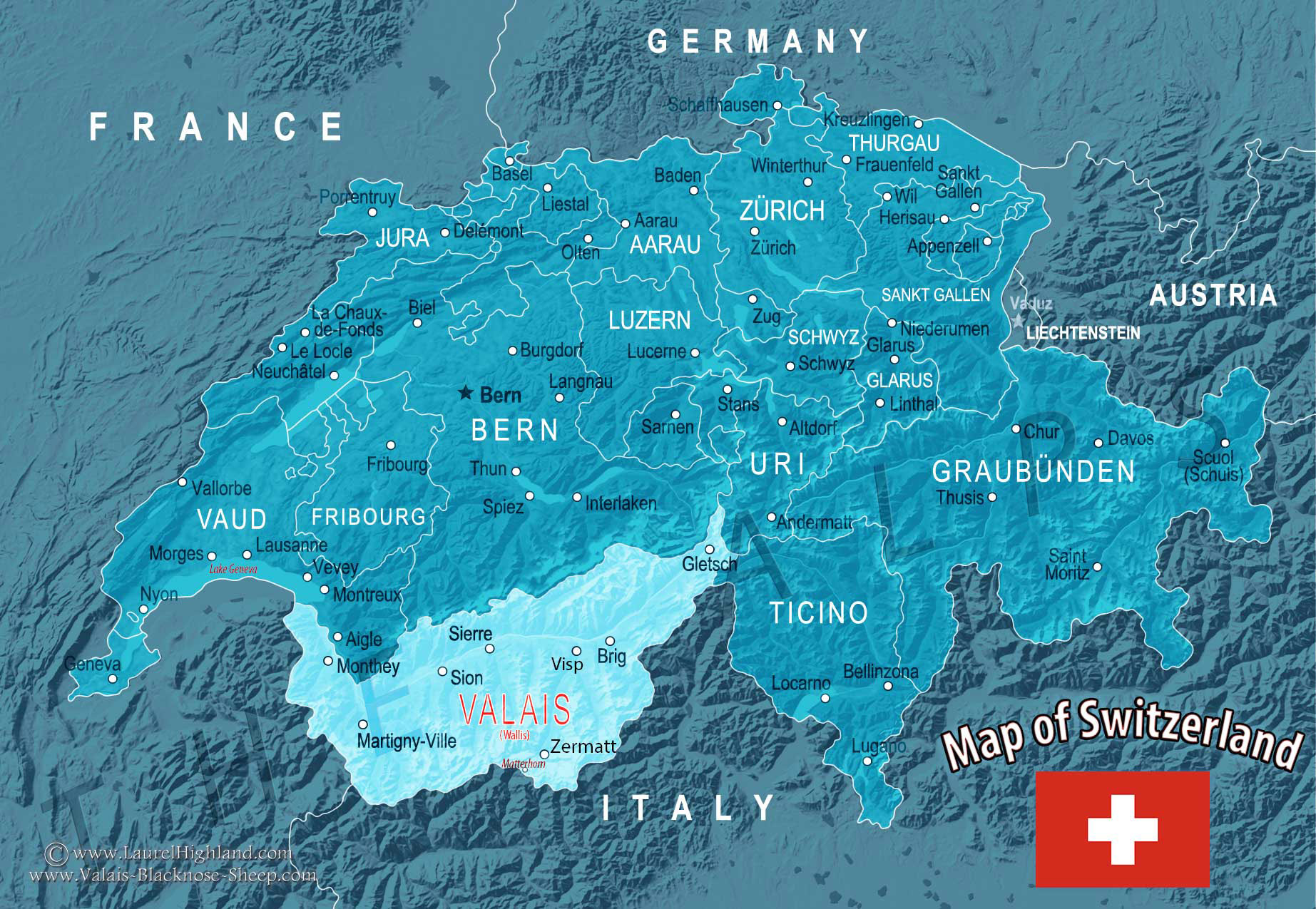 The black nose extending up to the middle of the head gives the Blacknose Sheep its name. The black color continues without interruption up to the eyes. Also the ears are black up to the head. In addition, we find black spots on the back of hocks and on the front of knees. Furthermore, the legs have short black "boots". The female animals have a tail spot. Also typical of the Blacknose Sheep are the helical or spiral horns. The wool plays an important role, meaning that the whole body, head and legs should be evenly well-covered.

[Note: As a large, relatively slow-maturing breed, Valais Blacknose ewes (in Switzerland) are usually not bred until at least 12 months of age. They are also nonseasonal breeders.]

⁘ Nose to the middle of the head is black
⁘ Black eye borders continuous with black color on nose
⁘ Black ears
⁘ Black, horizontal coloring of fetlocks [i.e., like short, black "cuffs" on the black "boots"]
⁘ Symmetric black spots on the back of hocks and on the front of knees
⁘ In females, a tail spot is desired, but this may not be too big and must be interrupted [by the white coloring of tail].
⁘ In the male animals no tail spotting is tolerated.
⁘ For females with absence of a [color] feature, depending on the type and format, a point deduction may be made.

[Notes:
• Males may also have black pigmentation of scrotal area, but black color should not extend up into fleece.
• Purebred Valais Blacknose may occasionally have "reverse" coloring — the so-called Spitti (a.k.a. "Splitti") color. (These are local slang terms — which may vary according to local village — meaning "black and white".) Sheep of this color may not be registered as breeding stock in Swiss Studbook, as color does not comply with Swiss Breed Standard. However, in the UK (which has a much smaller gene pool), the Spitti color is currently allowed for ewes and wethers only. Spitti-colored sheep often produce correctly-marked offspring.]

⁘ Spiral, well set-off in horizontal direction from the cheeks
⁘ Occasional black stripes are tolerated [Horns are otherwise typically light in color (often beige or light buff-colored).]
[Note: The horns themselves are somewhat flattened in contour, allowing them to twist upon themselves in addition to spiralling outward in the hornizontal plane.]

[Note: Docked tails should end in line with the top of the black markings on hocks.]

⁘ Strong and well placed [i.e., comes out of each "corner" of the body squarely]
⁘ Not cow-hocked and not "o-legged" [i.e., not bow-legged]
⁘ Straight front legs with wide stance (not "x-legged") [i.e, not knock-kneed]

⁘ Fineness 5 -4 [Swiss grade; approximately equal to 28-38 microns depending on age and gender (with fiber diameter generally finest with lambs and coarsest with adult males]
⁘ Staple length over 10 cm with half year of growth [i.e, over 10 cm (over about 4 inches) growth per 6 months, or over 20 cm (over about 8 inches)/year. Valais Blacknose are usually shorn 2x/year.]

⁘ Balanced and natural wool covering all over the body, including the head and legs
⁘ Uniformly white, some black fibers are tolerated on the neck (other than in males up to 18 months which is a reason for exclusion.)
⁘ Balanced fleece

⁘ In male animals, body spots within the fleece boundary (above the abdominal line), tail spots, and lack of a color feature

⁘ Kemp and/or tender fibers [Kemp fibers are short, medullated (hollow) fibers with pointed tips that may be found within fleece. Kemp is undesirable in fleece because it does not take up dye and is coarse, brittle, weak and "prickly". Tender or "hunger-fine" fibers are thinned and break easily, and may occur due to malnutrition, diease and/or scarring].
⁘ Excessive number of guard hairs [i.e, long, coarse, stiff, outer-coat hairs which may be present. They cause the same difficulties to the processing as kemp fibers, and are easy to recognize in the fleece because they are typically much longer than the actual wool fibers. ]
⁘Mixed-colored wool up to an age of 18 months in rams